Education ministries are working to create inclusive and equitable classrooms in pursuit of Sustainable Development Goal 4 (SDG 4). A key part of this is gender equality (SDG 5). These three charts give an insight into the complex picture of gender in teaching.

Chart 1: Two thirds of the world’s teaching workforce is female 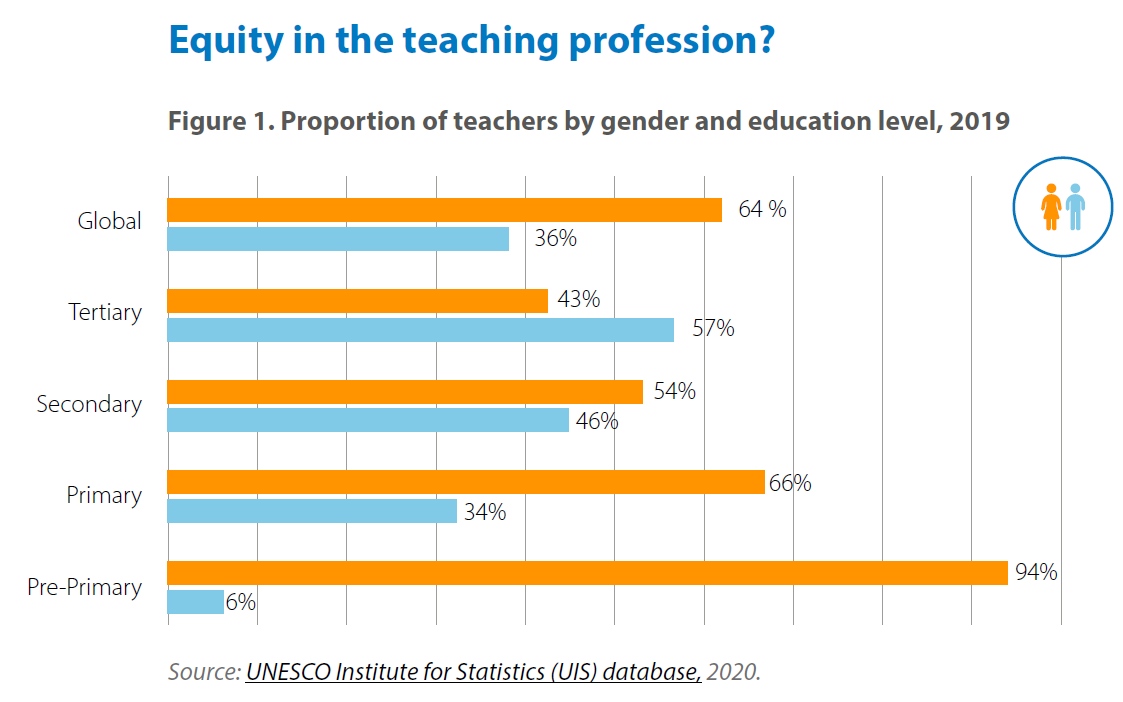 The proportion of women in teaching has grown in the past few decades, and today women make up about two-thirds of the world’s teaching workforce (64 per cent). However, to say that women are dominant in the profession would be an oversimplification; the proportion of female teachers varies with factors such as region, subject, seniority, and education level.

In high-income countries, teaching is a predominantly female profession with post-secondary education being the exception. In some parts of Europe, Asia-Pacific, Latin America and the Caribbean, this gender divide is extreme as women make up more than 90 per cent of primary and secondary school teachers.

While women are better represented in many regions, in sub-Saharan Africa, they are underrepresented in primary, secondary, and tertiary teaching standing at 45 per cent, 30 per cent and 24 per cent, respectively. The are the majority in pre-primary education at 80 per cent of all teachers.

Chart 2: In parts of Africa females in secondary education represent fewer than 30% of teachers 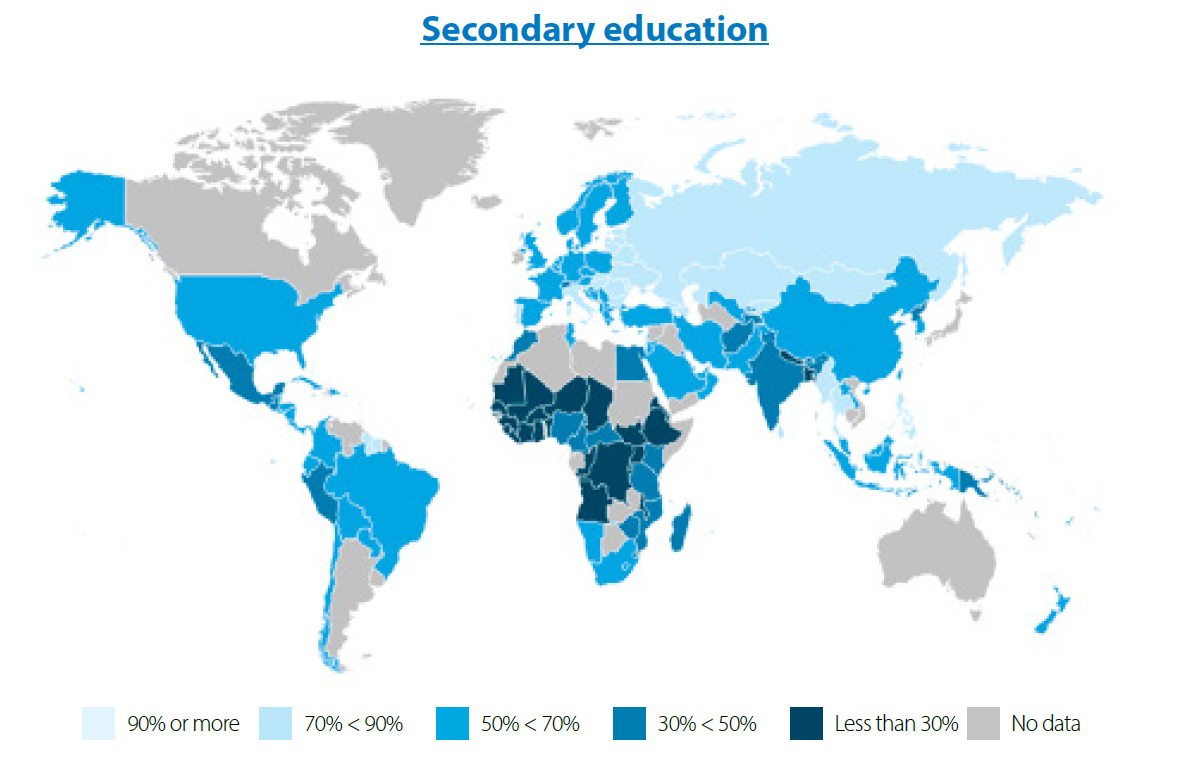 Many low-income countries have the opposite imbalance.

There has been a gradual movement towards gender parity in education systems in lower income regions. And efforts appear to be working. Since 2000, the proportion of women primary school teachers increased from 38 to 53 per cent in Southern Asia and from 42 per cent to 46 per cent in sub-Saharan Africa.

Chart 3: Male and female teachers are almost equal in terms of having achieved the minimum qualifications to teach at each level 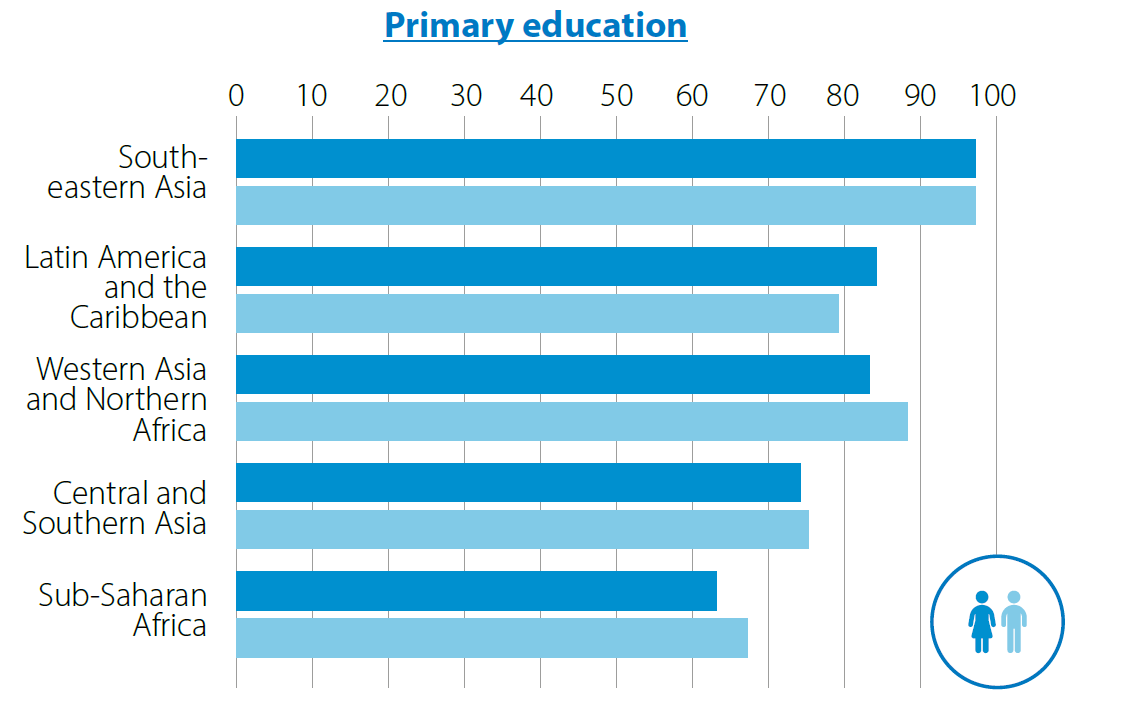 On a global scale, male and female teachers are near equal with regards to earning the necessary qualifications to teach at all levels. Yet there are significant gender disparities in a number of areas.

In some countries in sub-Saharan Africa however, female primary school teachers are more likely to have earned their qualifications than their male colleagues.

Yet despite being more likely to be qualified, women teachers still face inequality when entering the workforce.

In some cases, this disparity is particularly significant. Around 73 per cent of female primary school teachers in Sierra Leone had the minimum required qualifications compared with 59 per cent of male teachers.

The overrepresentation of men in teaching across sub-Saharan Africa may suggest that a lack of qualifications presents a greater barrier to women entering teaching than men with the same qualifications in some countries.

Teachers are role models, so it is vital for the teaching workforce to reflect the diversity of their students. Studies suggest that being taught by women may be correlated with improved academic performance and continued education among girls, while having no negative impact on boys. Working towards a teaching workforce in which women and men are equally empowered is key to ensuring inclusive education for all.

There is still some way to go before gender equality is reached in teaching. Efforts to reach gender equality should not be limited to encouraging more men to enter pre-primary and primary teaching, but should also include supporting women teaching at higher levels and in leadership positions.

This blog is part of a series of stories addressing the importance of the work of, and the challenges faced by teachers in the lead up to the 2020 World Teachers’ Day celebrations.

Consult the Gender in Teaching - A key dimension of inclusion infographic published by UNESCO and the International Task Force on Teachers for Education 2030.